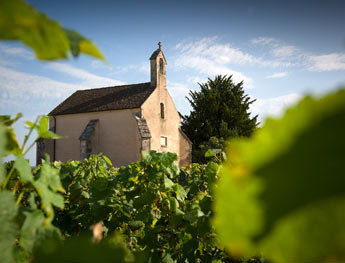 An American businessman, Mark M. O'Connell, is the proprietor of the Domaine Clos de la Chapelle in Volnay. He acquired this barely three hectare estate in March 2011 thanks to his friendship with Pierre Meurgey and Dimitri Bazas of Maison Champy. Champy look after the vineyards - now biodynamically - and make the wine.

The pearl in the domaine is the monopoly after which the estate takes its name: the Clos de la Chapelle. The half a hectare plot forms an east-west rectangle immediately to the south of the Bousse d'Or vineyard. Further downslope, just underneath the chapel, there are vines in La Chapelle. Upslope, marching with Clos des Ducs, are very old vines in Pommard, Les Chanlins. In Beaune there are further vines in Les Teurons. These are all premiers crus.

Since the takeover, from a member of the ubiquitous Boillot family, yields have been reduced - the aim now being 35 he/ha rather than 45 under the previous regime - the fruit is destemmed but not crushed, and given a week-long cold soaking. The wine is bottled after a year.

The new team took over the 2010s, which of course they had not vinified. These are very good. The 2011s are more sophisticated, though not as firm. This was the worst spot to be in 2012. Thanks to the hail the yield in Beaune was 18 he/ha, in Pommard 9 and in Volnay a pitiful 6. The wines, however are very good. I was particularly struck by the Pommard.