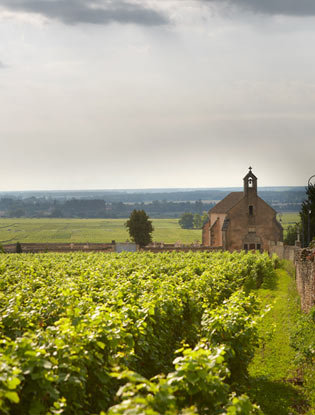 Nearly 150 years ago, Victor Boillot created this beautiful small domaine with its three 1er Cru parcels, which was subsequently inherited by Louis Boillot, the last member of his family to own the property. We were able to purchase this historic property in 2011 and rechristened it in honor of its flagship monopole as the Domaine Clos de la Chapelle.

The exquisite monopole vineyard, Clos de la Chapelle, has a long and colorful history, intertwined with the story of the beautiful chapel, for which it is named, and the historic village of Volnay, once home of the Dukes of Burgundy.  The chapel vineyard is located directly across the lane from the chapel, and beneath the walls of the former château of the Dukes of Burgundy.

Clos de la Chapelle is under the auspices of the Notre Dame de Pitié, to whom it was dedicated in 1540, when this spacious, Gothic chapel was constructed. The winegrowers' prayers at the Notre Dame de Pitié are famous for having saved the population from cholera, which ravaged the region in 1840.  In 1870 and 1871, the Prussians turned away from the village, perhaps in deference to the chapel and the powers of Notre Dame de Pitié.  The chapel, and adjacent cemetery, is a beautiful and historically significant landmark in the Volnaysian region.

The Dukes of Burgundy constructed a chateau in Volnay in the 8th century, and successive generations of dukes visited or resided in Volnay intermittently through the centuries. Robert II (1248-1306), Duke of Burgundy, received tribute from his barons at the chateau in 1272. His wife, Agnes, daughter of Saint Louis, lived there as well.  The succession of the Duchess of Burgundy to the throne in 1315 was celebrated in Volnay and was ordained by Eudes IV, who would later restore the  château's chapel.  Today, the mayor and the municipal offices of Volnay occupy the former chateau.

Clos de la Chapelle was part of the ensemble of parcels that previously constituted the Bousse d'Or. This Clos would not take the name of Clos de la Chapelle until 1937 because during the setting up of appellations, the administration of INAO (National Institute of the Origin and the Quality) mentioned the vineyard under the village denomination, Clos des Ducs.  This land parcel was particular in that it was side-by-side with the Bousse d'Or.  Surrounded by walls, it faced the entrance of the chapel.  This vineyard was thus a seigniorial land and was included in the Bousse d'Or until 1865.

The colorful and meticulously researched book, Volnay Clos de la Chapelle: The History of a Vineyard, by Philippe Remoissenet (c 2012) traces the history (beginning in 1425) of the two parcels that were eventually combined to become the monopole we know today. "To summarize, the Clos de la Chapelle was originally part of the Bousse d'Or. One parcel was property of the Brotherhood of the Saint Sacrément and a second parcel belonged to the Carmelite Nuns of Beaune.   The revolution and the buyback of ecclesiastical land as national assets resulted in changing ownership.  The Pinard family acquired the two entities that would later be reunited by Victor Boillot."

During the domaine's early era, Louis Pasteur requested as many as 50 bottles of wine from Victor Boillot as samples to use in his research and testing of wine diseases. The Emperor (Napoleon III) recognized Pasteur's research as "being capable of saving millions of francs for France."  Pasteur's letters to Victor Boillot over several decades give details concerning the alteration of the non-heated wines and arrived at the conclusion that "one heating was enough to protect the wines from germs and keep them during transportation."